Panevezys regional Court is hearing human trafficking case, that could be called the case of the decade. This case revealed the negligence, delay and signs of corruption in pre-trial investigators work.

The author of the article notices that in the Lithuania’s criminality review (2001) there are no records on human trafficking. It is further emphasized that in year 2001 – 2002 there were a lot of girls that were transported to foreign countries to work in the night clubs and brothels. It is stated that the investigators were indifferent to the parents that were reporting about the missing daughters, they also ignored the human trafficking victims that were deported to Lithuania and told about the horror that they had experienced.

The author tells about the specific trafficking in persons case that reached the Court only after more than ten years of the pre-trial investigation. As a result, a certain period has lapsed and therefore many traffickers cannot be prosecuted due to the Statute of Limitations of criminal liability.

The price of the slave

According to the author, starting with the year 1998 the value of a girl in the trafficking business was around 6000 EUR. This is the price that the owners of Spain night clubs and brothels would offer. In 2001 a criminal group was formed. The members of the group were from Panevezys and Taurage, their age varied from 19 to 32. For the girls that were searching job, the members of the group would suggest to go abroad to work as a waitress, nursemaid, dishwasher or to work in a mandarin plantation etc.

The author stresses that there was a strict separation of roles within the criminal group. Some of the members had to recruit the girls, other had a duty to bring victims to the transitional objects – the apartments that were specially rented for the potential victims, there were members that were responsible for transportation of girls to Spain.

The author names fourteen traffickers (including one woman) that were identified and belong to the mentioned criminal group (note: there were more suspects that were not identified). Only five of the identified traffickers have been prosecuted, the other cannot be subject to a judgement of conviction due to the Statute of Limitations of criminal liability.

In 2007 two members of the group were convicted of human trafficking together with the owner of one night club in Spain to which the Lithuanian girls were brought.

The testimony of the underage victim “Akvile”

One girl (the nickname – Akvile) told that she was offered a job in Spain. She was convinced that she would work in a bar as a dishwasher and she could help her parents that were unemployed. When Akvile agreed to go to Spain, the trafficker Lijana Pomereckiene asked her to take the most necessary items and the passport. Akvile was brought to the Lijana Pomereckiene apartment in Panevezys and the next day they drove to Poland.

The author highlights one essential moment of Akvile transportation. The trafficker crossed the border with the underage Akvile without her parents, which means that the traffickers have either forged the agreement of Akvile parents permitting Akvile to go abroad or the border crossing was arranged in advance with the state border guard (who was corrupted).

According to Akvile there were no problems as regards her age during the border crossing. Akvile told that soon after they crossed the border, Lijana Pomereckiene stopped the car at the roadside where the other car was parked. Akvile was told to get into the other car in which there were two young men. After three days of trip they reached a Spain town by the Mediterranean Sea. The men stopped the car by the night club where Akvile had to work. She was told to wait in the car, when the two came back they were angry, because the owner of the night club refused to employ Akvile
because she was not adult. The men told Akvile that they would take her to work in a bar in Germany instead, when Akvile protested one of them hit her on her face and told that “ if no one buys her in Spain, she would be sold in Germany”.

When the men did not succeed in selling Akvile in Germany, because she was underage, they left her in Germany and drove off. Luckily Akvile found help and came back to Lithuania.

In order to recruit other girls, the criminal group used the advertisement. In the advertisement they told that they transport people to foreign countries and provide help in the search of a job. The Taurage and Panevezys newspapers were full of such adverts. The criminals also used local radio stations to inform about their “services”.

“The caretaker of old people”

The other girl – Aukse – tells that when she was dismissed, she started searching for a job. Once she met a young man, whom she knew under his nickname Lysas, she knew him to live in the same district as she did. Aukse told him that she was searching for a job. After a week Lysas called her and suggested a job in the United Kingdom, but Aukse refused. Half of the year passed, but Aukse did not find the job in her city and then she agreed with Lysas suggestion. She was told that she would earn a lot in the UK.

Aukse was transported by two Lysas “friends” that were travelling to the UK, Aukse was told that they would help her to find a job. The two men also stopped to take one more girl that was going “to work abroad” too. When they were in Germany the two guys started asking if the girls knew where they were travelling. When Aukse replied that she was going to the UK to work as the caretaker of old people, the two men laughed and told that the girls were going to be taken to Spain to work as prostitutes for 3 months. When Aukse said she was not going to be a prostitute, she was beaten and threatened to be killed by one of Lysas “friends” who also took her passport. She was forced to be a prostitute and to work in order to pay back to the traffickers for “the transportation to Spain cost”.

After a month Aukse was taken to another city and accommodated in the night club called “Night Club 88”. The owner of the club briefly introduced Aukse and other girl to the rules of the life in the club. Aukse attempted to search for help and tried to call one guard of the bar, but soon after she was asked to go to the office of the club owner where she was beaten and cruelly raped. After that Aukse saw no point in asking for help, because all were related in the club. It was forbidden to leave the club, the premises of the club used to be locked and the girls were constantly guarded by security guards.

Once when Aukse refused to serve one customer, she was severely beaten and told not to resist otherwise she would be murdered. After the incident Aukse did not struggle. Auke complained to one of her customers – Chose – that she is sexually abused. The man helped her to escape. Aukse worked in the plantation of Chose friend, since she needed to earn money for the ticket back to Lithuania. Aukse also contacted the Lithuanian embassy in Madrid, because she needed the passport. Aukse told the embassy that the mafia took her passport and forced to work as a prostitute. The embassy did not help her, she was just told to travel home and the police would
take care of her.

Punished for the escape

The author emphasizes that the employees of the embassy did not clarified to the disturbed and morally damaged Aukse what to do in the situation.

Aukse told that soon after, in Totana city she was spotted by the Lithuanians who brought her to Spain, they grabbed her in the street and put in the car. Aukse was taken to one apartment where she was tortured because she had escaped. The men used the tape to tie Aukse arms and legs, also they put the tape on her mouth. The traffickers burned the back of Aiste with an iron, they also burned her eybrow with a cigarette. The men kicked her and ultimately raped. When the men fell asleep, Aukse went to balcony and managed to climb to the balcony of the neighbour. She told him
what happened and then addressed the local police office. The Spain police brought Aukse to the hospital. Later Aukse was accommodated in the center for victims.

Aukse gave her first testimony in 2003, in 2007 she supported her testimony. Aukse identified all the traffickers that participated in her sale and that sexually abused her. Unfortunately, only two of them are prosecuted. The oher identified perpetrators avoided the prosecution due to the limitations of criminal liability, in other words – due to the negligence of the investigators. 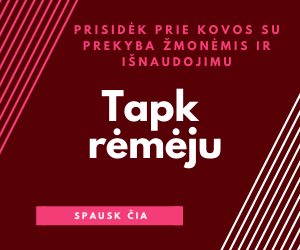